This article (original article written in Japanese) was released February 2016.

Mr. Shu, jewelry designer, lives at the base of Mount Yotei. He is well known in Niseko as a hard-core skier. In April of last year, Shu completed the famous tour skiing route: Niseko Hault Route. This attracted attention among local skiers. Niseko Hault Route is a backcountry ski route between Nisekoannupuri and Iwanaidake in the Niseko Mountain range. This route normally takes three days, but was accomplished in one day by Shu. In spring, he showed us a photo of him getting to one slope via bicycle. Today, we are going to interview Shu and hear about his ski life. 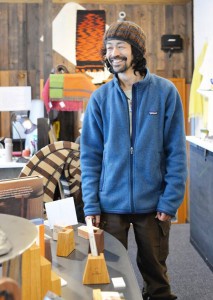 KODAMA（K）：To Begin, can you talk about your one-day ski trip on Niseko Hault Route last season?

Shu（S）：That was in the middle of April. I couldn’t sleep at all the night before. My ski partner also could not sleep that night, nor my wife who dropped us off at the base. My friend and I were discussing the route we should take. We contemplated this for a long time—late into the night.

K：Can you tell me the route in detail?

S：The route begins at Iwanaidake, then to Mekunnaidake, Maemekunnaidake, Shirakabayama, Shakunagedake, Chisenupuri, Nitonopuri, and Iwaonupurri. We started at 5:00 am and finished at 5:00 pm. It took us twelve hours. Normally, ski touring simply follows a ridge; however, we wanted to ski down nice slopes, so we altered our route. As a result, we had a harder hike up in some places.

K：Why did you try to do the route in one day?

S：There are a few benefits to doing that. Firstly, we can reduce our gear to a minimum. Secondly, if we do a three-day tour, we have more chances of a bad-weather-day. If we do it on the same day, we can choose the best conditions. Skiing long hours in a day gives us variation of different snow, which is a lot of fun. In the morning, snow is quite hard. After sunrise, the snow starts melting, and becomes the best corn condition. In the afternoon, the snow will re-harden. 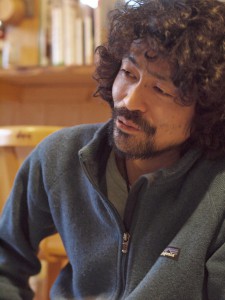 S：I usually ski Mount Yotei about ten times a season. I ski a variety of slopes down Yotei. Yotei is a special slope for me. Hiking up is very tough; however, going down has a long and steep slope, which is excellent. Because Yotei is a high mountain, and stands alone, independently from a range, it is highly affected by the wind conditions. Sometimes, it is difficult to enjoy the ski down because of the wind conditions. If the conditions are good, it is that much more enjoyable. This is what makes me ski Yotei again and again. In fact, one of the reasons I moved to Niseko was that I heard Niseko is a power spot. I understand now that power spot means Yotei. Now, by chance, I live on a foothill at the base of Mount Yotei.

K：Do you ski any other slopes in the area?

S：I ski almost every day in the winter season. When the ski resort is open, I ski mainly in the resort, and do tour skiing when the conditions are really good. After the ski resort closes for the season, I continue doing backcountry until the snow disappears, which usually is the end of May or middle of June. I actually have skied most of the mountains in Niseko Range. I found that Nisekoannupuri has many good slopes. It is a particularly good mountain in the Niseko Range because while most mountains only have a few skiable slopes, Nisekoannupuri has many. My house is located almost equal distance from each of the four different resorts of Niseko United. When the ski resort is open, I choose which resort I will start for the day depending on the snow conditions. When Peak Gate is open, I start from Hirafu because it is easiest to get to the summit of Nisekoannupuri from there. When snow stops falling and the weather becomes calm, I will go backcountry skiing. Every year, I ski Mount Yotei, Iwaonupurri, Chisenupuri, Iwanaidake, and Mount Shiribetsu.

S：When I did that, half the road to the top of the slope was closed. The road gate was closed at Goshiki Onsen, but there was no snow on the road. So I parked the car at the gate, then carried on by bicycle. I enjoyed that ski because there were no other people.

S：No. I skied the north face of Nisekoannupuri. It has great conditions in spring. Nice steep slope and there was lots of snow still left. Sometimes it is very wet snow, which is the best in spring. 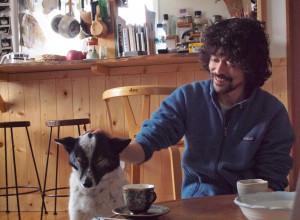 K：You often ski with your dog, Packe, is that right?

S：Yes, it is great fun skiing with Packe. In midwinter, I take Packe when the snow in not too deep. She hikes quicker than anyone. She travels further than we do because she runs back and forth, but she still travels faster than any person. When we ski down, she is not as fast as a skier in midwinter, however, she is still fast, using our ski tracks. She actually rescued me once. I was the last person in a group hiking up. Visibility was very poor. I was caught by an avalanche and drifted about forty meters down slope. Because I was the last person, no one else noticed I was caught by an avalanche. Only Packe was aware. She came down to where I had drifted. When Packe came down, I was very relieved.

K：Wow, a dog has such a great ability.

S：To go tour skiing, we need a lot of gear, very expensive equipment, like skis, ski jackets, and much more. However, a dog does not need anything. She doesn’t even need to carry water—she eats snow. Sometimes she runs through the snow with her mouth open. In the winter, dog fur changes to adapt to the winter conditions. However, I don’t take her if there is more than 50 centimeters of fresh snow because she is a small dog. She may get buried, or it may be very slow for her in deep snow. The only problem is when she finds wild animals. She chases the animal sometimes very far. I can’t control her and she may not come back for a while. I start worrying. In spring conditions, Packe runs so fast down the slope. She just keeps up with me.

K：Thank you very much Shu. I am so excited.

Up until last ski season, Shu skied in daytime and worked nighttime as a ski tuner/maintenance. This year, he will concentrate on jewelry design. His lifestyle revolves around his skiing. The key is his passion and energy in addition to his work management, skiing friends, and support from his wife, and even dog.

Msayuki Ito/ Max
Born in Ebetsu, Hokkaido,1971, I have been telemarking about twenty years. However, I haven’t had many chances to tour ski—mostly skiing in the resort or lift access-backcountry. I used to live in Tokyo, Australia, then New Zealand, and moved to Niseko in 2010. Now I am challenging a new lifestyle with my family. We are running an accommodation in Niseko. I found Niseko is a showcase for alternative lifestyles. I understand that Japan is the easiest country to start skiing—skiing can be for everyone here—and I think this is one of the best aspects of skiing in Japan.