This article (original article written in Japanese) was released August 2016.

In Spring, 2015 I was with my friend in a bar talking about trying Niseko Haute Route—Let’s try on a good day in April of next year to hike on the Niseko range from the coast side to Annupuri.
La haute route meaning high trail in high altitude, is also the name of one of the most famous ski trails in the European Alps. Niseko Haute Route is a 40 kilometer trail along the ridge in the Niseko Mountain range from Mount Raiden on the coast side to Mount Nisekoannupuri. If you extend walking up to Mount Yotei, which is the icon of Niseko, the whole trail will be 70 kilometers.
In fall of 2015, we walked half of the trail as a preliminary inspection. In April, 2016 we tried to complete the whole way, however, the weather was not good enough and we decided to stop halfway. To complete Niseko Haute Route, we need to sleep in the mountains by bivvy sack. Also, we need to prepare equipment carefully: water, food, warm clothing, with the balance of weight and comfort. We tried several times to find a better arrangement of equipment. That was part of the fun for us, getting prepared for the trip. 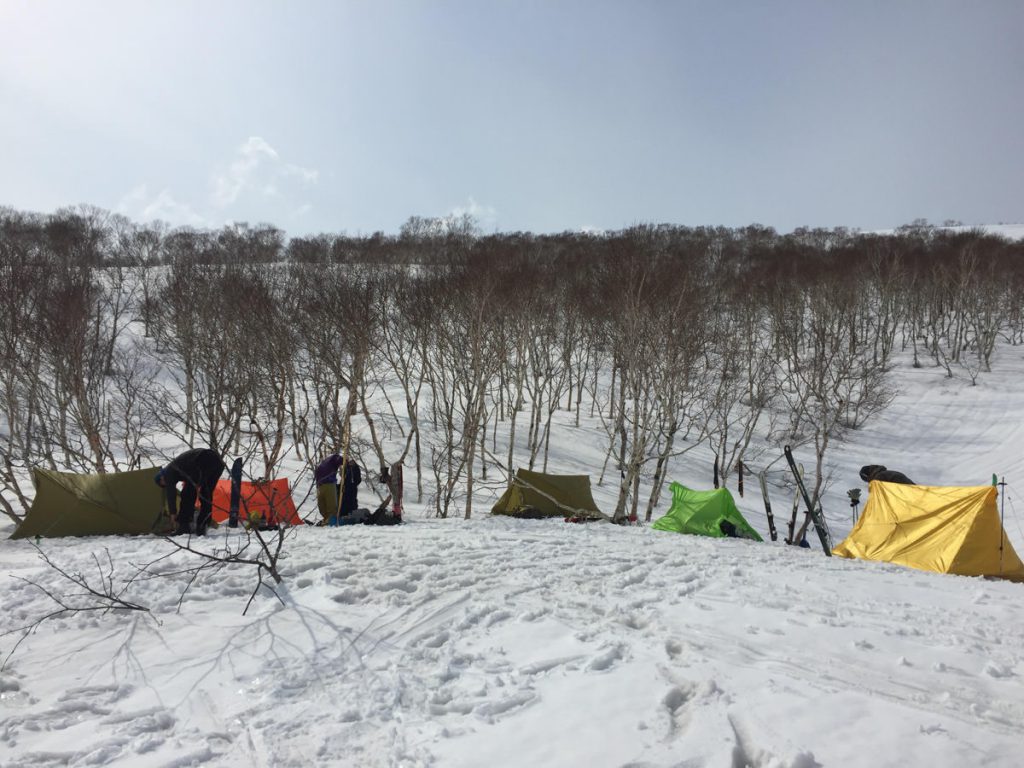 Day one was from Asahi Onsen to Niimi Pass, half of the complete trail and approximately 17 kilometers. We passed the summits of Nakayama, Maeraiden, Horobetsudake, Mount Raiden, Iwanaidake, Mekunnaidake, and Maemekunnaidake. We started hiking up from Asahi Onsen (coast-side of Haute Route) at 8:00am. This onsen has stopped operation, but it is a very special place. There is a legend that two hundred years ago, an injured bear used the onsen to heal itself. 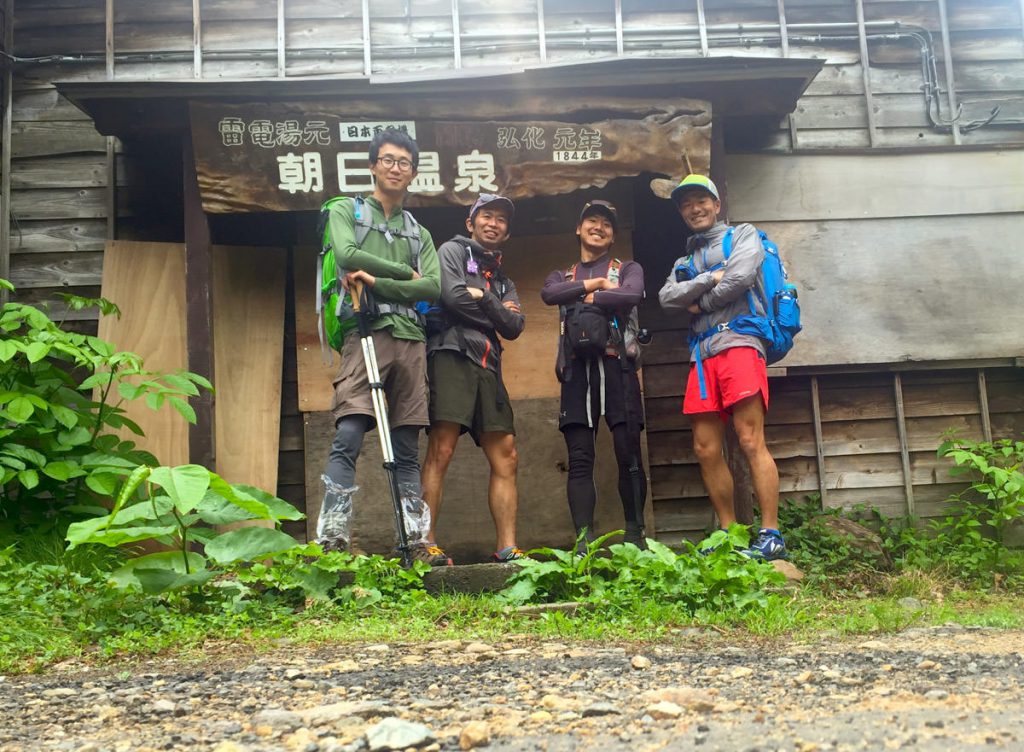 As soon as we started, we hiked up a steep trail in a deciduous forest, gaining 300 meters of vertical altitude. It was rainy and very humid, unusual weather for Hokkaido. We got very wet, and sweaty. My cap was saturated, and started dripping from the brim. Rain suits would make it even worse, so rather than get steamed out from our own body heat, we chose to get wet from the rain. With such a tough start, I started worrying about the rest of the trail. 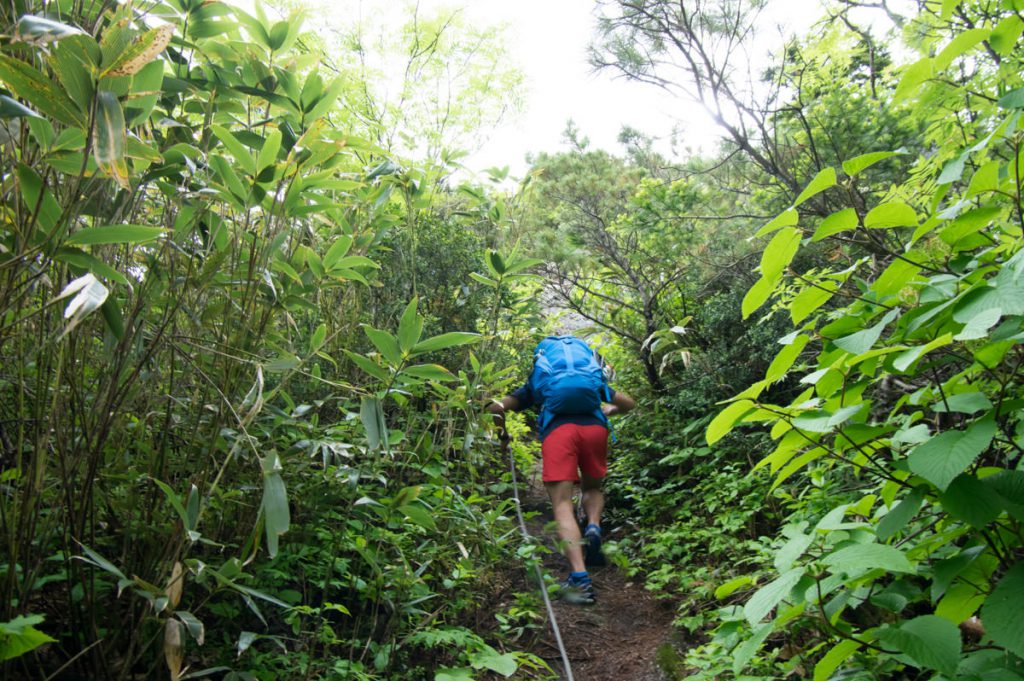 Within an hour of beginning, we got to the ridge. Even though it was still raining, the top of the ridge is a different world. It is at the top of the clouds, there is a nice breeze, less humidity, and cooler temperature. This is Hokkaido. The first ridge, having more gentle gradient changes compared to other ridges in the Niseko Range, made for easy trail running. When the weather is clear, we can see the town of Iwanai, however, the view this day was obscured by clouds. Instead, standing above the unkai, or cloud sea, we walked in a parallel world. 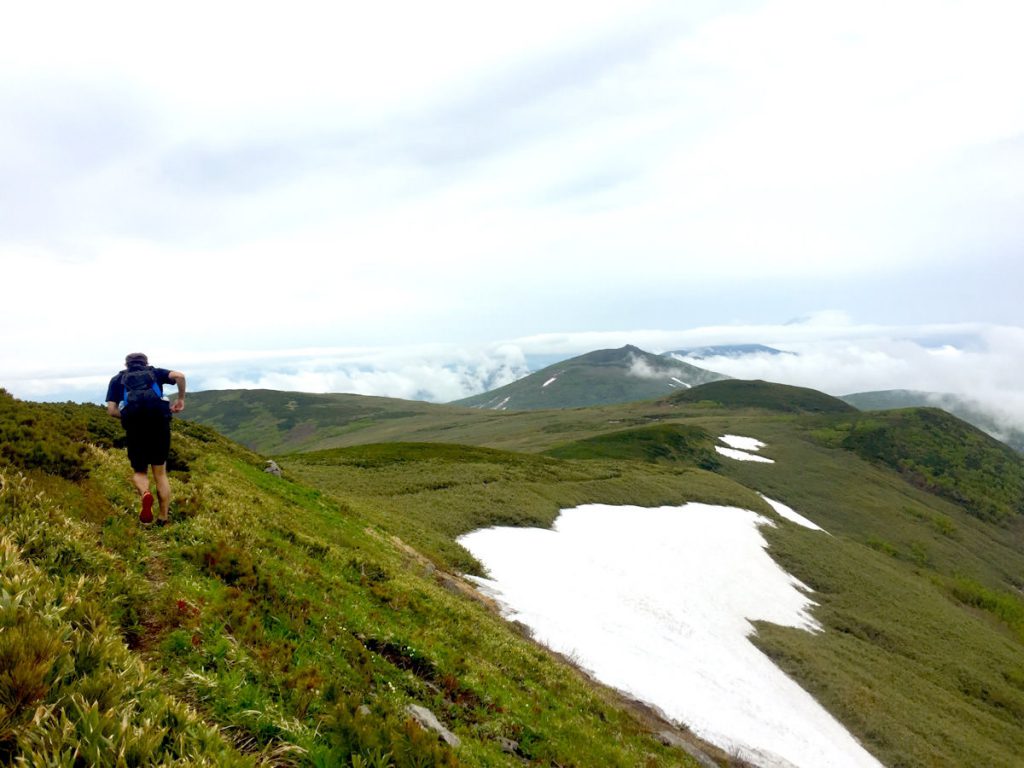 In June, we still saw much snow in the mountains. On some faces there was a lot of snow left. The biggest challenge for day one was walking over giant snow valleys. There are several snow valleys blocking the trail; some are steeply sloped and very wide. I regret that I only had trail running shoes which did not work for crossing the snow valleys—I kept falling or slipping down. If I tried to pass around the edges of the valley, I took the risk of falling through the snow shelf. It was therefore difficult to find the best path across each snow valley, and exhausting. After crossing several snow valleys, we reached Mekunnaidake, which is also locally called ryuu-no-se, or dragon’s back. Today’s trail had been surrounded by bamboo, ponds, and wetlands, however, at the peak of Mekunnaidake, the terrain changes to rock, so we enjoyed a little rock climbing. After Mekunnaidake, the route for day one was almost finished. We walked down to Niimi Pass, tonight’s campsite, via Maemekunnaidake. It took only eight hours. There were not many people walking on that route. Starting from the sea side, walking roughly 20 kilometers, we did not see anyone else. One member of our group finished hiking here because he needed to return to work the next day. The four remaining hikers camped at Niimi Pass for the night. 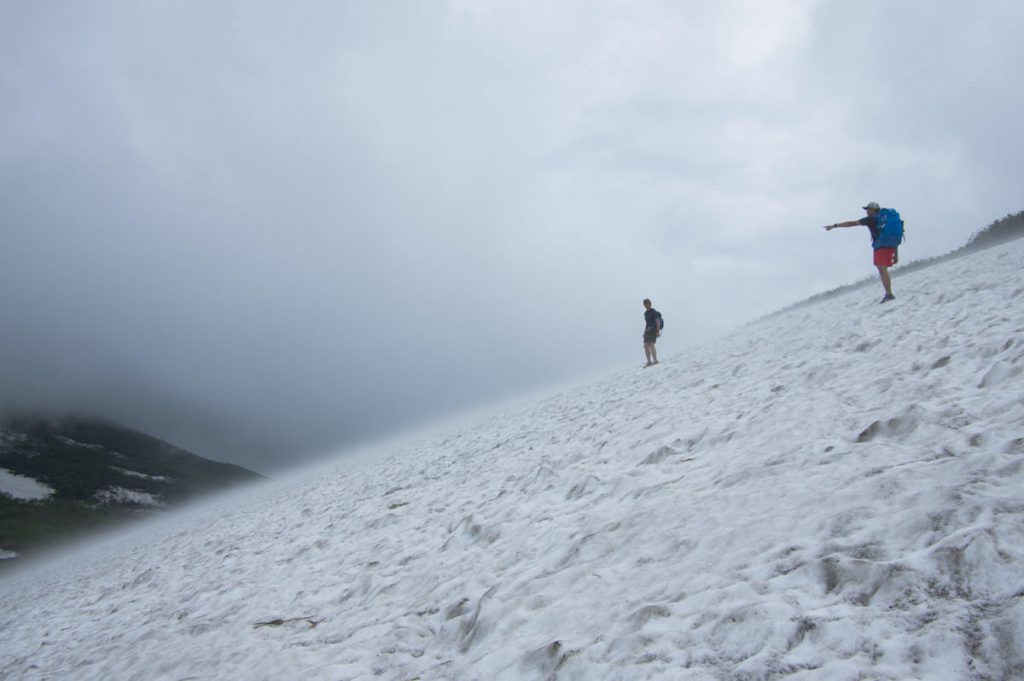 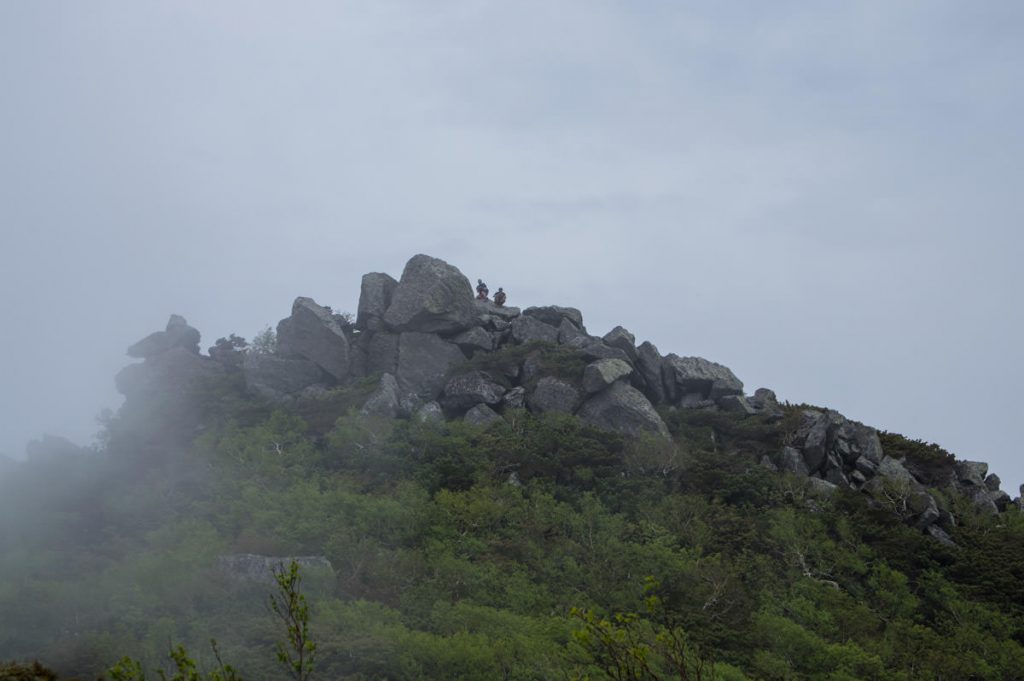 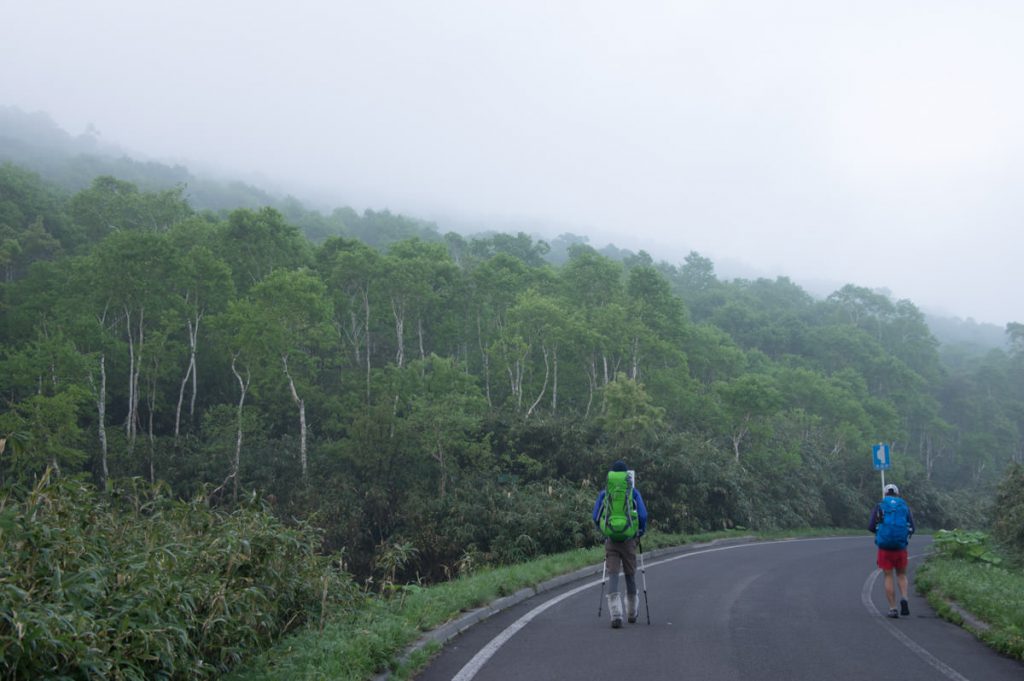 On the mountain, everybody wakes up early. We began preparation around 5:30 am and were back on the trail as the sun was rising. The mountain terrain of day two was a continuation of day one’s Niseko Range hiking, but more difficult as each peak became increasingly distinctive with larger elevation changes. We ran on the ridge at Shirakabayama and an unknown peak just after sunrise where it was still a gentle ridge, nice for running. After that, Chisenupuri, Nitonupuri, Iwaonupuri, and Nisekoannupuri were more like mountain climbing. From the peak of Chisenupuri, we could see Nitonupuri, Iwaonupuri, Nisekoannupuri, and Mount Yotei lined up from shortest to tallest. 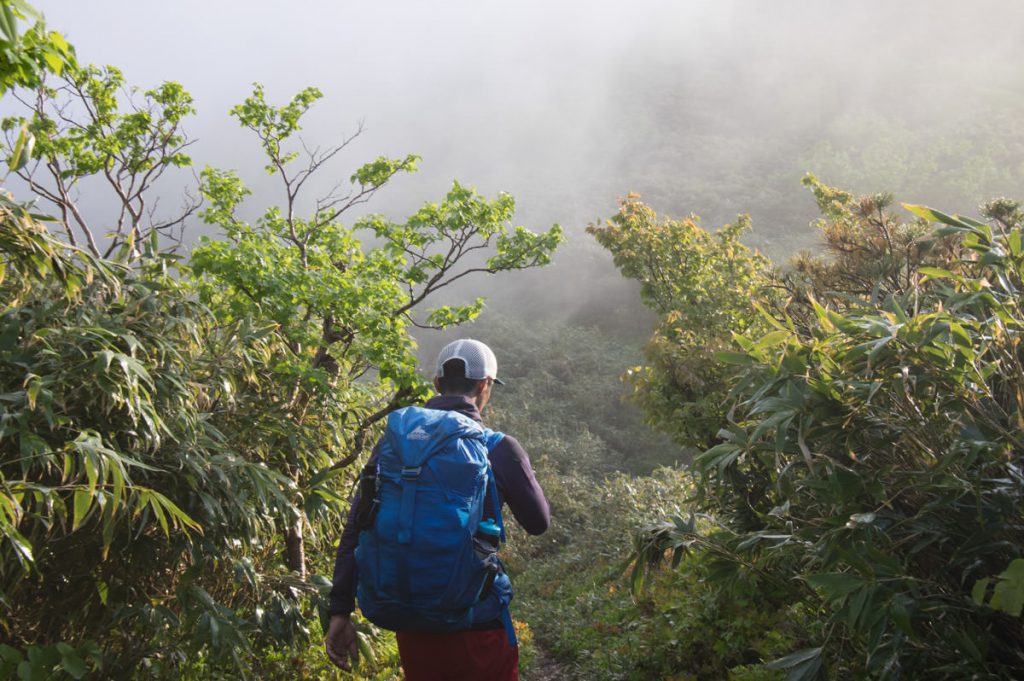 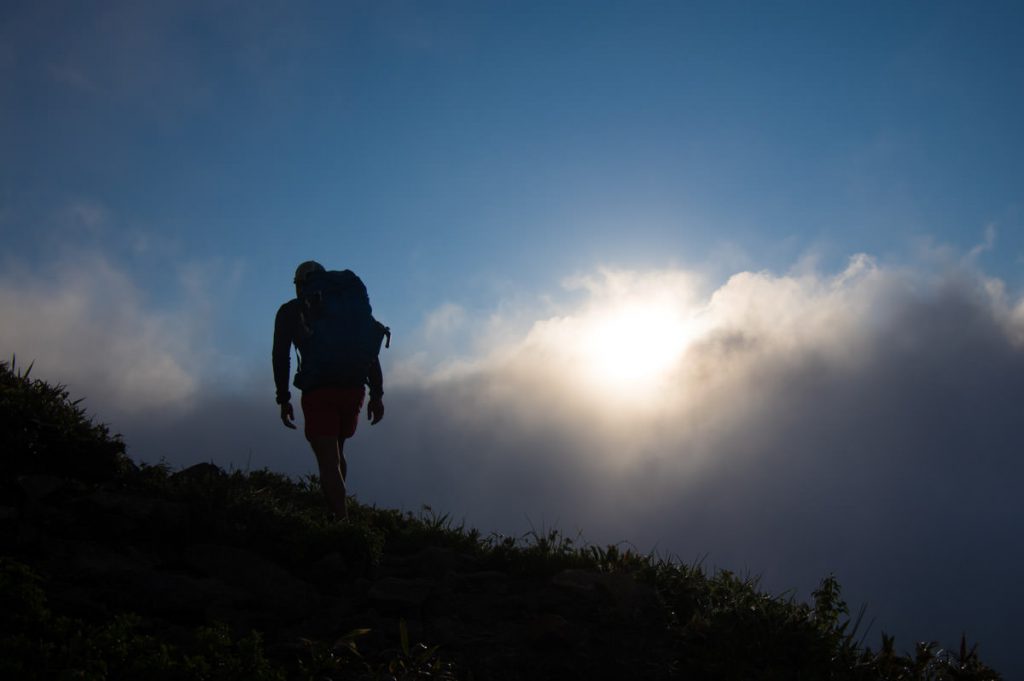 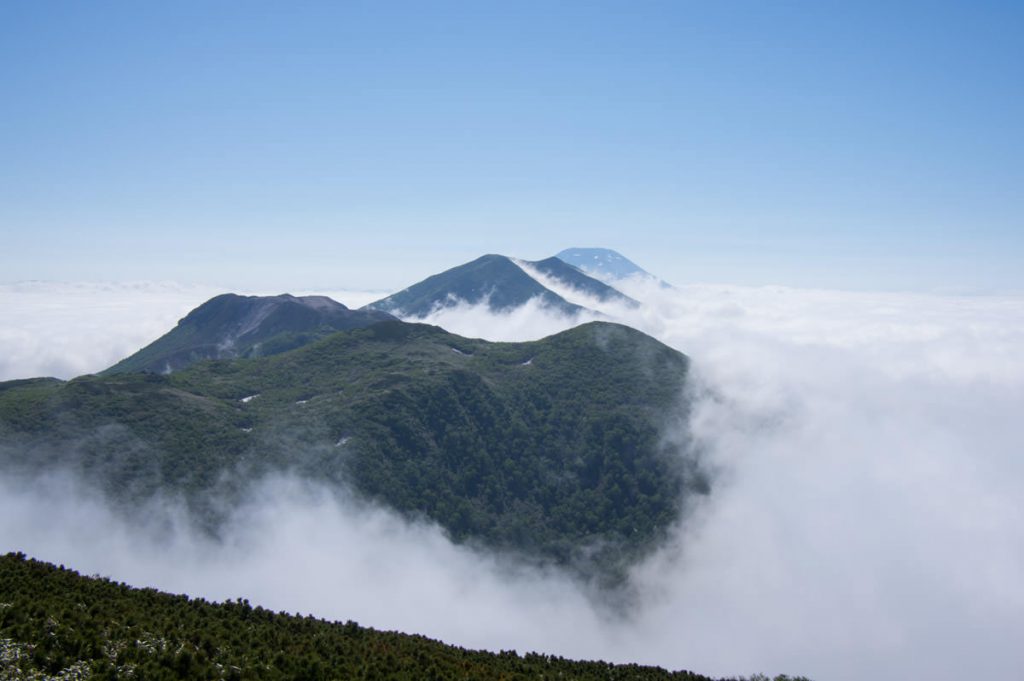 On the haute route, the next area we came to is more popular for hiking. We saw more people and the trail was also better maintained. This area has many natural herbs, and people were harvesting bamboo shoots. This scared us several times, mistaken for the sound of a bear in the woods. After passing Nitonupuri, the scenery changes again. Iwaonupuri looks so rocky. By the time we finished Iwaonupuri we were quite exhausted and still had the last and highest mountain of the trip to go, Nisekoannupuri. We decided each to hike at our own pace and meet at the top: either walking slowly, taking pictures, or running. At the peak, we could see mount Yotei clearly. 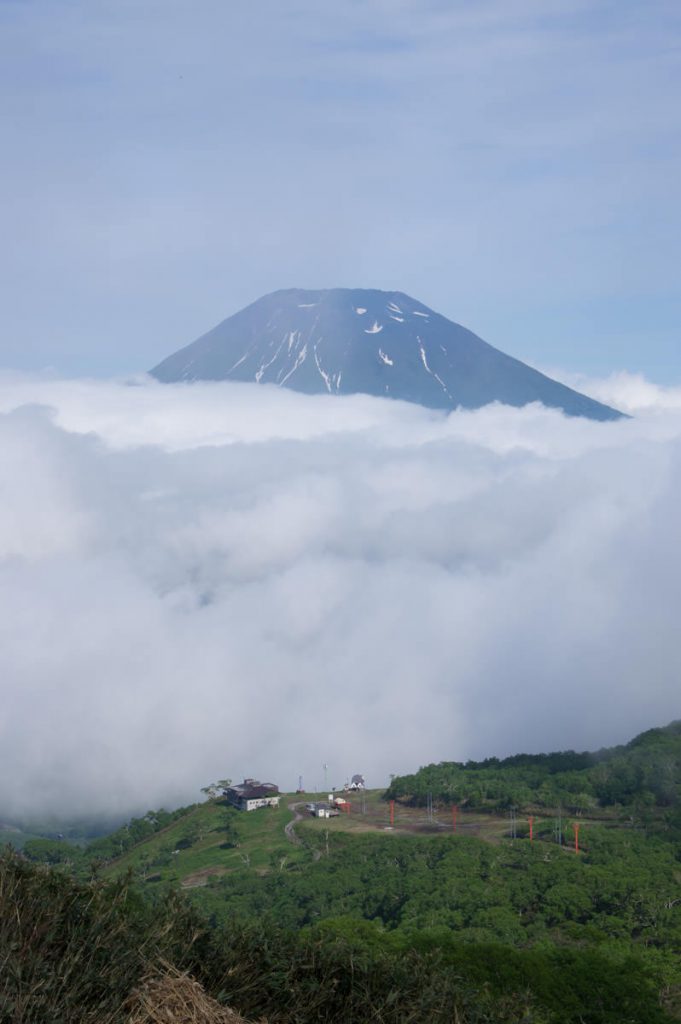 There are four ski resorts in Niskoannupuri. In the last few years, Niseko has become more international. Many people come from all over the world chasing powder snow. In the resort, there was a lot of construction underway for next winter: a new chairlift, hotel, condominiums, and commercial buildings, ect. From our perspective walking down from the top of the clouds, Hirafu looked like a big town.
Contrasted with the rapid changes of the town, the mountain is always there without change. It is totally up to each person whether we can enjoy this environment or not. There are no rules to enjoy walking in the mountain. I think everybody should find and enjoy the mountain in his or her own way. Despite each person’s individual way of enjoying the mountain, sometimes we share the way for a time—from this, we may even find a new way. In our particular group we had good variety and this gave us new discoveries.
Walking down into the resort past the construction of new chairlifts, we looked back on the past couple days, and our enjoyment of the trip. It was only an overnight trip, however, we learned much from each other’s different ways of enjoying the mountain. After the trip, everyone in the group thought about what we can do next in the mountains. Traveling the Niseko Haute route is a great way for people to enjoy the mountain in a variety of styles. Yoshitaka Toge
Born in Chiba prefecture, I moved to Niseko in 2004. After working as a kayak instructor, and ski patrol, we opened the café Sprout in 2009. The theme of Sprout is outdoor sports culture in Niseko. Now I am busy learning about coffee, as well as enjoying skiing, trail running, kayaking, and playing with my three children.